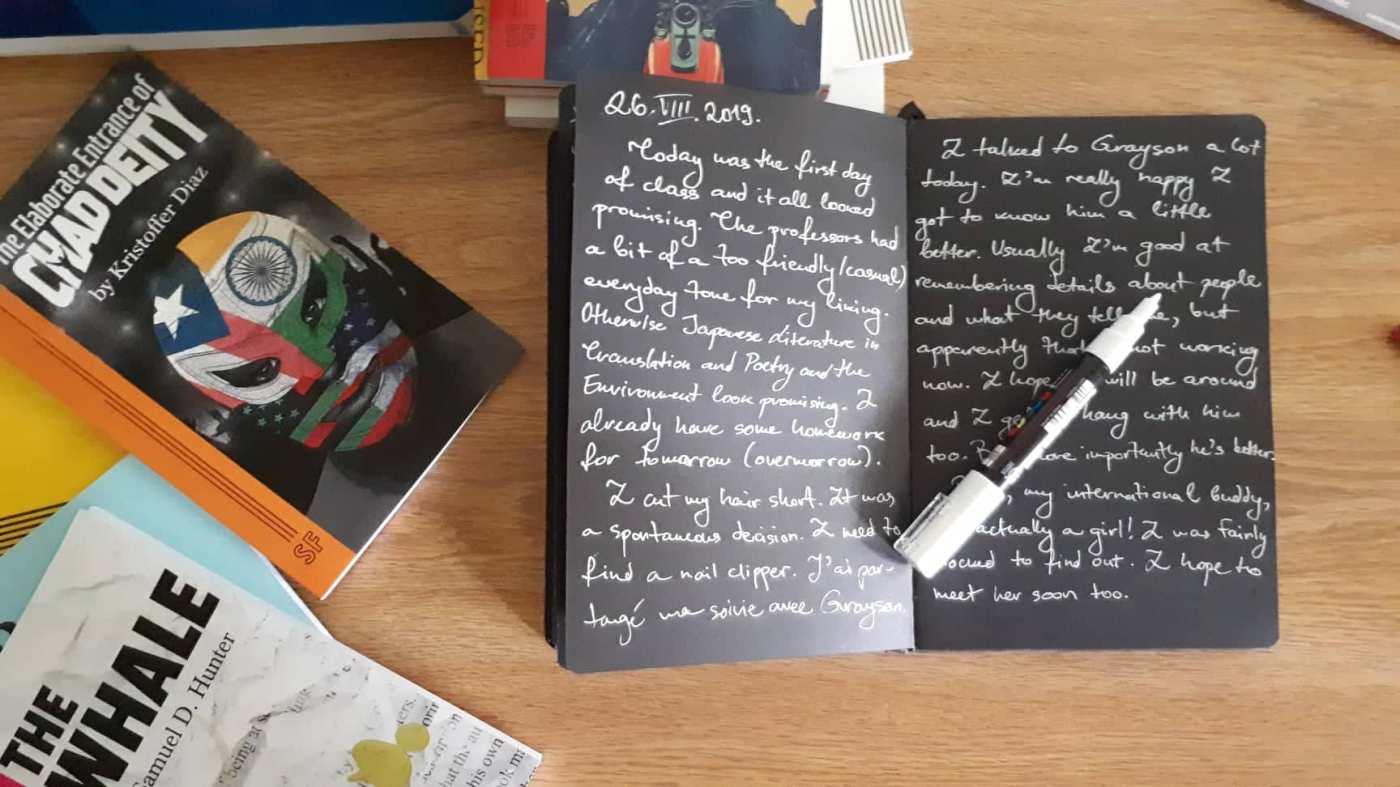 I write to you about the benefits of diary writing and writing in general. You may not like to write. To be entirely honest with you, there was a time I did not like it much, either. I used to not like to put words on things or people, to call them out in such an offensively crude way. I refrained from assigning labels to anything as much as I could because no words could possibly do justice to the essence of what a thing is or who a person is. This is normal, right?

However, I did consider myself a writer, next to a vegetarian, a student and a skateboarder. These four nouns I had come to grant myself over the years, yet I still considered them, like any word, profoundly cruel. To write one word means not to write a thousand others. The same went for speaking. To force your thought to fit a preferably grammatically correct sentence is to slaughter it, to cut off its limbs and leave its desecrated carcass open to the market of interpretation, and I’m a vegetarian. Words are overrated, take it from a Literature student. Whenever possible, I communicated exclusively with high-fives, like any good skateboarder.

As you can imagine, I used to be a very quiet kind of person, a very reluctant writer and a very generous high-fiver. My relationship with writing changed last summer, when I met this guy, this I-drink-too-much-beer, check-out-my-skateboarding-videos-I-did-when-I-was-younger, funny, burly type of guy. After half a dozen high-fives, we decided to switch to Luxembourgish. He told me something about himself few people know. He writes his dairy every night, without fault. ‘It’s the only time of the day I’m really honest with myself,’ he said. He only has two rules. One, never to read what he has written the day before and two, to burn every notebook once he has finished writing it. He has burned eight notebooks. This is normal, right? This ninth one he’s working on, he’s thinking about keeping it to read later in life. He described the process of writing his diary as genuinely cathartic. He vents his unhelpful emotions, his anger and frustrations through the ball of his pen. Whenever he felt like he was losing touch with reality, his diary brought order to his chaos. It helped him to process the post-traumatic distress of the loss of loved ones and the stickiness of suicidal thoughts. There, he could assemble the shattered pieces of his life into one coherent, self-reflective ensemble. In short, it’s self-therapy. This clashed with my ever-graded, school-related idea of writing. I started to write my diary, first sporadically, then on a daily basis. I found what he said to be true. Beyond that, diary writing made up (and made up generously, because it fulfilled me on a deeper basis) for the social media I’d given up shortly before. (My social media output consisted mostly of pictures of my left hand, my right hand and, on special days, the two of them high-fiving.) No more did I show other people how happy I was (or how moist my hands were.) No, from thereon after, I allowed myself to acknowledge the underlying, mute sadness, to voice it. It spurred my bad memory. It helped me to put words on things and people. It helped me to write, it helped me to speak, first to myself, and then to others. It helps. That’s all I’m trying to say.

FLAME: As someone who’s on their semester abroad in the US right now, I’ve started to write my diary more often. I promise it gives some structure and offers a form of physical memory-recollection which surpasses normal mental capacities. I also plan to self-immolate, but I would never burn my diary writings, those will be available for purchase post-mortem (originals or copies, still under negotiation).

If you’re interested in more about diaristic writing, here’s a blogpost I wrote some time ago.